Jeff Belanger is an author, adventurer, and one of the most visible paranormal researchers today. He’s the founder of the new legend tripping movement and is the Emmy-nominated host, writer, and producer of the New England Legends series which debuted on PBS in October of 2013.

Since 1997, the journalist has interviewed thousands of eyewitnesses to paranormal occurrences. He’s the ultimate insider and knows how to connect with people from all walks of life when it comes to the unexplained.

He is the author of over a dozen books on the paranormal (published in six languages) including the best sellers: The World's Most Haunted Places, Weird Massachusetts, Our Haunted Lives, and Who's Haunting the White House? (for children). He's the founder of Ghostvillage.com, the Web's most popular paranormal destination according to Google, and a noted speaker and media personality. In January of 2014, he was asked to give a prestigious TEDx talk in New York City.

He's also the host of the cable/Web talk show, 30 Odd Minutes which is available in over 9 million homes in the United States and Europe on Sky TV. Belanger has written for newspapers like The Boston Globe and USA Today and has served as the writer and researcher on numerous television series including Ghost Adventures, Paranormal Challenge, and Aftershocks on the Travel Channel. He's been a guest on hundreds of radio and television programs including: The History Channel, The Travel Channel, Biography Channel, PBS, NECN, Living TV (UK), Sunrise 7 (Australia), The Maury Show, The CBS News Early Show, CBS Sunday Morning, FOX, NBC, ABC, and CBS affiliates, National Public Radio, The BBC, Darkness Radio, Australian Radio Network, and Coast to Coast AM.

Nikki Folsom is an independent author whose fascination with the paranormal began early. She saw her first apparition at the young age of five. Strange experiences continued throughout her journey into adulthood.  With limited resources and a new family, Nikki attempted to ignore the unexplainable activities and force herself into a “normal” reality.

Her reality shifted quickly when her daughters began witnessing frightening occurrences of their own. Conflicted, she found herself with one of two choices - continue to pretend this activity wasn't occurring or facing it head on.

After twenty seven unfulfilling years in corporate America and an intense curiosity in the paranormal, she made the decision to chase her dreams by diving head first into the world of writing.

When she began volunteering at a haunted theater in 2009, she realized the historic location would be the perfect subject for her first publication. For months, Nikki invested time in researching and writing her first book, The Haunted Harlequin. Now that the book has been released, she plans to continue investigating, researching, and writing about other haunted locations from around the globe.

Nikki was born in south central Pennsylvania. After a brief stop in Florida and Illinois, she and her family now call San Antonio, Texas home.  When she’s not writing, Nikki enjoys reading, traveling, photography, theatre, and spending time with family and friends. She loves hearing ghost stories from her readers through email, social media, and at appearances. 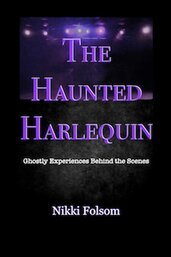 Greg Lawson is a 10 year military veteran and is a career law enforcement officer who is currently a patrol sergeant in Central Texas. His expansive and diverse background along with his academics studies leads to his interdisciplinary perspective on education, training, and human interaction.

Greg is a lifetime member of the Veterans of Foreign Wars (VFW) and holds an honorary Admiral commission in the Texas Navy.
Greg received his master's degree in education, specializing in the management of technical education, complex adaptive systems, and how to manage change within large organizations. He is a proud alumni of Texas State University

Robert Murch is the world’s foremost collector, historian, and expert on Ouija and Talking Boards and serves as the Chairman of the Board for the Talking Board Historical Society which he founded. His bizarre relationship with Ouija began after watching Kevin Tenney’s Witchboard in 1986, a century after the talking board made its debut. Murch purchased his first antique Ouija board in 1992 and became obsessed with unraveling the mystery of its origins. Since then he’s devoted his life to researching the history of the Ouija board and its founders, with Murch often traveling the world to track down descendants of all those involved with the introduction of the mystifying oracle.

Murch showcases his research and knowledge on his websites robertmurch.com and williamfuld.com, having collaborated with Hasbro, Winning Moves, USAopoly, TCG Toys, and ToyCo (producers of the Ouija board today), the National Archives, the Library of Congress, and on various films including Ouija, Ouija: Origin of Evil, Ghost Team, Inherent Vice, What Lies Beneath, Sugar & Spice, and Drive-Thru. He’s also consulted on or appeared in numerous TV programs featuring Ouija, including Fox’s The Exorcist, Investigation Discovery’s True Nightmares, UKTV W’s Celebrity Haunted Hotel Live, Destination America’s Exorcism: Live!, Travel Channel’s Ghost Adventures and Mysteries at the Museum, ABC’s Castle, TNT’s Rizzoli & Isles, CW’s Supernatural, A&E’s Storage Wars and Paranormal State, Showtime’s Bullshit!, Smithsonian Channel’s My Million Dollar Invention, HGTV’s Who’s Lived in my House?, CBS Sunday Morning, and 30 Odd Minutes. Numerous periodicals including the Smithsonian Magazine, TIME Magazine, the Wall Street Journal, the Baltimore Sun, and Inventors Digest consulted Murch for popular articles on Ouija boards and featured him and his research on the topic while Reddit tapped him to host an IAmA on all things Ouija.

Murch is a returning guest on Coast to Coast AM and an accomplished international lecturer, speaking at museums and conferences around the world. He was named guest curator of the Baltimore Museum of Industry's groundbreaking Ouija exhibit Let the Spirit Move You, often collaborates with the Strong – The National Museum of Play, and through the Talking Board Historical Society, organized OuijaCon 2015 which celebrated Ouija’s 125th Anniversary with the city of Baltimore. Murch is currently collaborating with Brandon Hodge to create a book on the definitive history of spirit communication. Ever the pioneer, Murch was one of the first same-sex couples legally married in the United States and lives with his husband, Gary Halteman, in Denver, Colorado. What’s next for Murch? You’ll just have to ask the Ouija board! For more information, please visit TBHS.org

Greg Lawson is a 30-year law enforcement officer, a professional investigator, police academy and collegiate educator, and former expert witness for the state in reference to investigative procedures.  He also researches and investigates human paranormal experience and locations known for spiritual or unusual activity. He has authored two books on the subject and specializes in providing alternative perspectives to explain human experience.
http://www.authorgreglawson.com/
Follow us on FACEBOOK @deadcreepypodcast
and TWITTER @dead_creepy
Share | Download(Loading)

(PART ONE) Interview with The Paranormal Detective Greg Lawson M.E.d.

of a two-part exclusive interview with

Greg Lawson is a 30-year law enforcement officer, a professional investigator, police academy and collegiate educator, and former expert witness for the state in reference to investigative procedures.  He also researches and investigates human paranormal experience and locations known for spiritual or unusual activity. He has authored two books on the subject and specializes in providing alternative perspectives to explain human experience.
http://www.authorgreglawson.com/
Share | Download(Loading)
Society & Culture

Get this podcast on your phone!